Laurence Sterne’s experimental approach to narrative is attractive to both writers and artists – he uses images and ‘devices’ that are astonishingly modern for a novel of the eighteenth century. Paint Her to Your Own Mind is based on Sterne’s request to create an image of ‘beauty’ on a blank page. A truly interactive game with the reader.

By Volume VI his exuberant and provocative approach to telling the story of Tristram’s life and opinions has reached the point where he surrenders all responsibility and allows the reader to do all of the work. Page 147 is blank. Sterne wants to stimulate the creation of the most beautiful woman that ever existed and invites the reader :

To conceive this right, —call for pen and ink— here’s paper ready to your hand, —Sit down, Sir, paint her to your own mind—as like your mistress as you can —as unlike your wife as your conscience will let you—‘tis all one to me— please but your own fancy in it.

There, ready and waiting, is the blank page for you to ‘paint’ her.  Sterne’s clever phrasing makes the suggestion ambiguous – you can imagine her (paint her to your own mind, to your imagination) or you can actually make the image of her (paint her the way you think she should be depicted).  And this can be any way you wish – in words, collage, musical notation, oil, poetry, photography, watercolour…the page is your oyster.

Continuing the theme of the two previous exhibitions (The Black Page  & Emblem of My Work) Paint Her to Your Own Mind invites 147 artists / writers to join in creating 147 different representations of beauty. 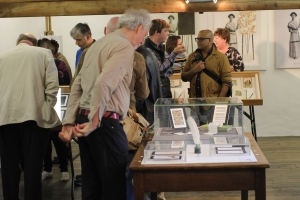 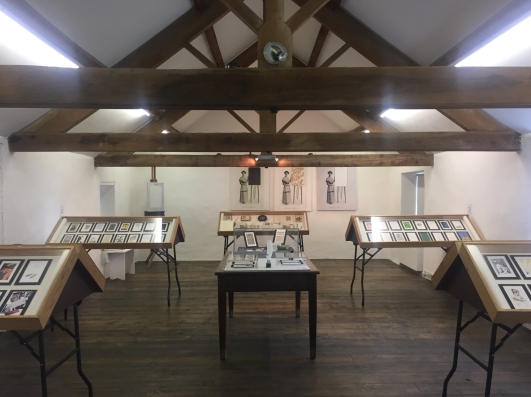 The pages on display are anonymous, leaving the visitor to guess which artist / writer created which page.

Each page has been donated for sale by auction and online bidding is available on this site until 12pm noon 16 November 2016.

Open every day except Saturday

The Life and Opinions of Tristram Shandy, Gentleman is, among many other things, a work about conception.

It starts with Mr and Mrs Shandy in bed ‘as near nine kalendar months as any husband could in reason have expected’ before the birth of the hero on 5 November 1718. In fact the ‘little family concernment’ takes place on the night of 5-6 March 1718, which is only eight calendar months, and deliveries in the eighth month were regarded at the time as illegitimate. Tristram Shandy ends on a related note with the news that Obadiah’s cow has failed to conceive after being put to the town bull, which was owned by Walter Shandy.

The notion of conception, both literal and figurative, is repeated throughout the book: in the Preface to the first volume Sterne declares how happy he would be if he could ‘conceive it has beguiled you [William Pitt] of one moment’s pain’; in volume II the well-read reader ‘may easily conceive’ Toby’s vexation. Some references to conception are negative: Toby ‘cannot conceive how it is possible’ that Yorick’s sermon has been found in Toby’s copy of Stevinus; in a reference to Slawkenbergius’ Tale, Tristram laments ‘how this can ever be translated into good English, I have no sort of conception’; in a discussion as to which member of the family Tristram takes after, Mrs Shandy declares ‘’I cannot conceive, for my life’, which elicits from her husband the monosyllabic ‘Humph!’; while Walter himself would often declare ‘that he did not conceive how the greatest family in England could stand it out against an uninterrupted succession of six or seven short noses’, a genetic disadvantage which might well explain the ambiguity attending the birth of his son.

Sterne frequently uses the image of conception to describe his position vis-a-vis his reader, most notably in a lament upon the short-comings of words which can ‘darken your hypothesis by placing a number of tall, opake words, one before another, in a right line, betwixt your own and your reader’s conception’. Words are essential to an author, but can also be a bane. It is notable how frequently Sterne resorts to non-verbal communication: dashes, asterisks, illustrations by Hogarth, a black page, a marbled page, diagrammatic lines of plot, and a woodcut illustrating the path of the tip of Trim’s stick, when the Corporal is at a loss for the right word.

This exhibition concentrates on a moment in Tristram Shandy when non-verbal communication and conception intersect. Faced with the difficulty of adequately describing the Widow Wadman, the narrator abandons the task:

To conceive this right, — call for pen and ink — here’s paper ready to your hand. — Sit down, Sir, paint her to your own mind — as like your mistress as you can — as unlike your wife as your conscience will let you — ’tis all one to me — please but your fancy in it.

Not only is the reader invited to conceive: it is noteworthy that whereas all the other non-verbal elements are framed within the blank margins here the reader’s conception can extend to the very edges of the page. This is the moment when Sterne most effectively reinforces the core element of the enduring success of his masterpiece:

Writing, when properly managed, (as you may be sure I think mine is) is but a different name for conversation. As no one, who knows what he is about in good company, would venture to talk all; — so no author, who understands the just boundaries of decorum and good breeding, would presume to think all: the truest respect which you can pay to the reader’s understanding, is to halve this matter amicably, and leave him something to imagine, in his turn, as well as yourself.